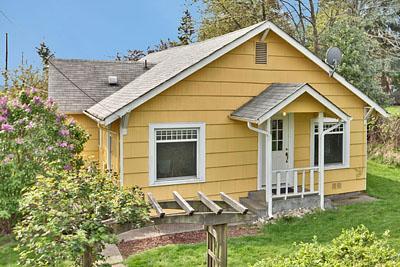 We purchased the Seattle Homestead on March 24th, 2011, and quickly began a 2 week process of painting and moving.  Then I ripped out a big chunk of lawn and made raised garden beds covered in white clover. Most of the winter of 2011-2012 was spent preparing to build an earthen wall around the house and sheet mulching most of the yard (we’re almost entirely grass free now).

Spring, summer, and fall of 2012 was spent building a chicken coop (we have 5 hens now), ripping out a chain link fence and hedges, building a 120 foot long earthbag wall, installing a brick patio, and getting funny looks from everyone who drove past our home.

2013 will bring more work and completion of our wall, and finally, more plants!

Length of Wall: ~120 feet
Height: 6 feet
Polypropelene Sandbags Used: 1500
Cubic Yards of Fill Dirt Inside the Wall: Somewhere around 30-40
Number of Neighbors Who Have Stopped By To Ask What On Earth We Were Doing: 110-120 as of Fall 2012 (and we enjoyed meeting every one of them!)

The only true homestead plan exists in Kane’s head.